The story of Juan Pardalet and María Consuelo is one of a couple who have always striven to do their best for their family. A lifetime of work brings its rewards, and their reward is the day-to-day appreciation of their customers—and, of course, the fact that today their children are heading up the family business. Their fishmonger’s business, Pescados Consuelo y Pardalet is located in Santa Eulalia del Río, and sells live seafood and fresh and frozen fish. What began as a tiny fishmonger’s over 30 years ago has grown to the point where it recently acquired a 500 m2 industrial unit for a wholesale business. Before starting this venture, Juan Pardalet had spent 12 years working in the catering sector in Ibiza, Palma, Madrid and Tangier, as a chef and a manager, a professional background that gave him a clear insight into the requirements of his customers.

When and how did Pescados Consuelo y Pardalet start?
The business was set up about 30 years ago. We were working in a company where I was a partner, and as we needed money, we proposed that they let us rent the fishmonger’s stall in the market. We rented it, and we took over other market stalls, including the butcher’s. When we started working in the fishmonger’s, I had no idea about running a business, but as I had worked for many years as a cook, I knew lots of other cooks and restaurant owners. We worked hard and bit by bit, we grew. When we started out, there was just my wife Consuelo and me, and we had a lad working with us for four or five years. Later on, my son Juan José joined us, and he has been with the business for eight or ten years.

What is the father-son relationship like inside and outside work?
I have a very different character inside and outside work; when I’m working I’m very professional, tough, hardworking, as I like to see things done well, by the book… In my personal life, I’m a good friend to my friends; I try to help them, and when I’m at home, I forget about work and devote myself to my family. I love football (which I used to play when I was young). My wife says if only I was the same at work as I am at home, but you can’t help the way you are. We do our best.

What has been the effect of your children joining the business?
It’s true that they didn’t know much about fish or about cooking. They started with the business in order to help their father, as they could see that he was struggling and needed some support. That was nice for me because if, for example, they wanted to buy a car, they could buy one because we had money coming in, and so we had a harmonious atmosphere at home. They are entrepreneurs too, and I think they’ve enjoyed seeing their father at the head of quite a big concern.

My children are entrepreneurs too, and I think they’ve enjoyed seeing their father at the head of quite a big concern.

What are the problems involved in selling live seafood and fish?
The problem with the seafood is the 90% of the time it is still alive when it is delivered, so you have to have good facilities so that the lobster, crawfish and langoustines can recover… Otherwise, a lot of them die.

What percentages of home and international produce do you work with?
About 30% comes from abroad, but mainly that is the daily catch: we buy a lot of monkfish from France, and a lot of raw ingredients from Tunisia (grouper, dentex, scorpionfish, four-spot megrim). In Algeciras, we have an agent who buys produce for us in Tangier, Senegal and Mauritania. Of course, we also buy produce such as monkfish, clams, oysters, grouper, wild sea bass and turbot in Galicia. We have a buyer in Barcelona, and we get a delivery of raw ingredients by plane three times a week, so that we can supply the restaurants we work with.

Is there a scarcity of fish on the island?
There are times when yes, there is a scarcity. The local catch is relatively small. There are only the trawlers that (sometimes) catch a lot of squid, gerret fish, four-spot megrim, whiting, etc. But that isn’t the kind of fish that restaurants in Ibiza want. We had really bad weather this winter, and the fishermen often could not put to sea, so there’s been a great shortage of fish. It’s true that there’s a shortage of fish on the island, but of course in the winter, there’s also a shortage of people to buy it.

When we talk about Ibizan produce (such as Ibizan prawns), is there enough to supply the island’s restaurants?
No, the island produces about 60% of what the restaurants require. So we have to source the rest from abroad: Barcelona, Galicia, Tunisia…

The new facilities at Consuelo y Pardalet have involved a huge investment. How are you approaching this new phase?
With great excitement, with a lot of work, with hope and, of course, with the support of our friends and colleagues—and a huge effort from the whole family.

What are you aiming for next?
To pay off the loan to the bank (he laughs).

At home, would you say you were big consumers of fish and seafood?
We eat more fish than meat. Mainly because we like to go and try the fish at restaurants which are customers of ours: the grilled fish platters at Can Pujol, the bullit de peix (traditional Ibizan fish stew) at Balansat, the marinated fish at La Noria or El Pulpo, the Es Xarcu restaurant…

Are your Ibizan customers very demanding?
Yes, very demanding, because they are head chefs working with the raw ingredients. And everything passes through their hands; if they are sent a fish that is not up to standard, they waste no time in getting on the phone and giving you hell. With good reason, of course.

Our customers are very demanding, because they are head chefs working with the raw ingredients.

How do you handle the ingredients, and what types of special recipes do you make?
Previously, we were retailers; we weren’t registered with the food safety authorities, and we couldn’t handle the raw ingredients. It’s three years since we registered with the food safety authorities and obtained our import licence, so we can now freeze certain products, such as cuttlefish and sirvia (a local white fish), of which there is sometimes a glut on the island. Also, we occasionally freeze Ibizan prawns. In addition, there are restaurants who ask us to prepare the squid, so that it can be served Andalusian style; we chop up the cuttlefish for putting into paella, and we vacuum pack it…

You’ve had a 30-year career… what do you take most pride in?
I’m proud of all of it. Of our good fortune, our friends, our health, and a lot more besides.

I’m proud of all of it. Of our good fortune, our friends, our health, and a lot more besides.

What would you ask of the younger generation at Pescados Consuelo y Pardalet?
I would ask them to be healthy, fortunate and, most of all, to be very patient.

Gian Paolo Turci, one of the most successful entrepreneurs in Formentera

Juan Pedro Domínguez, The Winner of the XI Cocktail Competition of Ibiza and Formentera 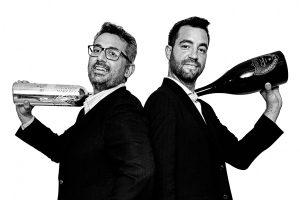