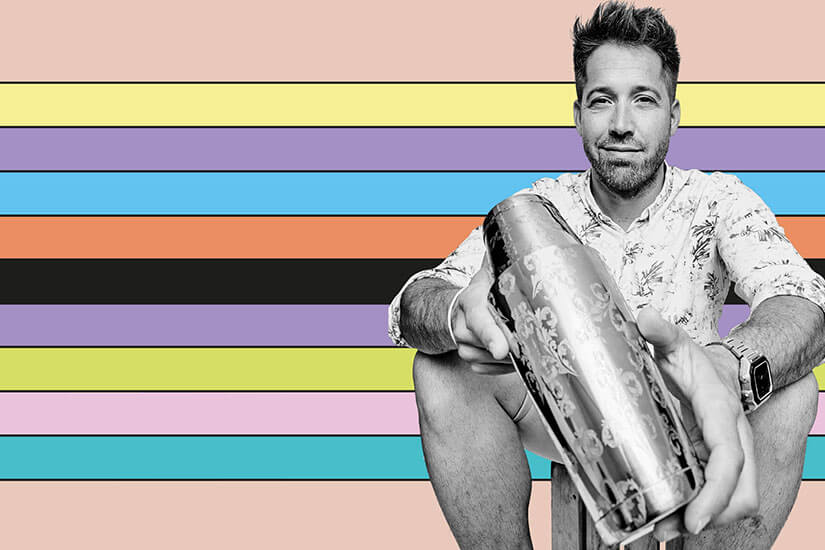 Vicente Andrío arrived in Formentera eight years ago unaware that he was about to find his second home and his true vocation. That summer he worked for the first time behind the bar and he has not wanted to leave since then. He started training at the best cocktail schools, and today he runs the bars for the Cala Saona group (Cala Saona, Sol, Sa Pedrera and Fonda Platé). In Cala Saona he has created an original fusion of tiki and Mediterranean cocktails which adds a tropical and casual touch to the restaurant’s offer.

Why Formentera?
Eight years ago, by chance, a friend told me that she had just worked a season at Formentera where she earned a lot of money. So, I came out. I didn’t earn much money, but I had planned to spend the winter in Australia, and I needed to work to save. The jobs I have been offered over the years have got better, and I have been finding my niche on the island.

Bartender or mixologist?
I have always said that I am a bar waiter. I’m a bartender, but I mix my own, original drinks too. I’ve never competed because I don’t like competition. I want people to have fun and enjoy my cocktails and, I like it when there is a good vibe where I’m working. I like to say that we don’t sell cocktails, we sell sensations.

I have always said that I am a bar waiter

What training do you have in cocktails?
The first year I worked in Formentera, as a waiter, I noticed that the bartender earned more money than me, had more fun and pulled more often. It was then that I decided that I wanted to be a bartender. That same year, the mixologist had to leave mid-season and I had to replace him without knowing anything about cocktails. I had to learn quickly. That winter I went to Australia and started to train on my own by doing online courses. Then I trained in Madrid at the House of Mixology and then at Bartrainers, in Barcelona, both very good cocktail schools. I continue to train, doing small courses on my own and by surrounding myself with good professionals from whom I can learn a lot, like Antonio Naranjo, Álvaro Martín, Daniel de la Pola…

I noticed that the bartender earned more money than me, had more fun and pulled more often. It was then that I decided that I wanted to be a bartender

You take advantage of the winters to travel and continue training…
Absolutely. I enjoy travelling to tropical destinations, the best is in a van and surfing. And during my trips I can create new things. In Hawaii I fell in love with the tiki cocktails, in Cuba I visited the famous Bodeguita del Medio and tasted a real mojito, which is very different from the mojito we drink in Europe. I get ideas from each trip, just like a chef does. 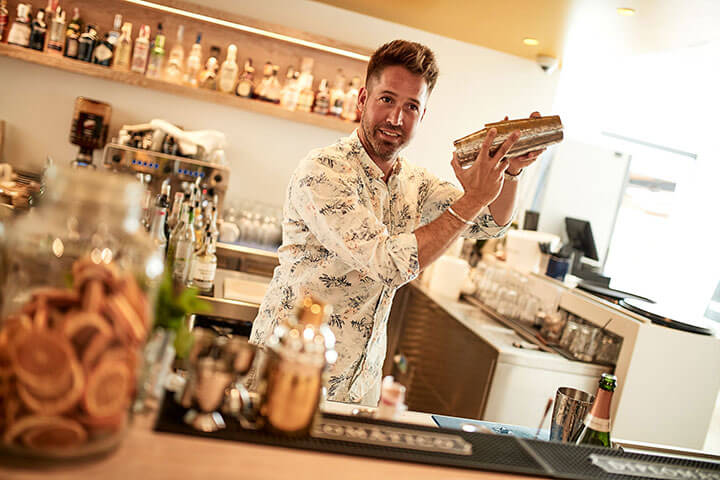 What are your thoughts on the relationship between cocktails and cooking?
The kitchen and the cocktail bar have recently become closer. In Cala Saona we have been working together with the chef, Borja Molins, for two years, to pair cocktails with desserts and create special cocktails for the tasting menus… I think that mixing cocktails and food is the future.

I think that mixing cocktails and food is the future

At what stage is Spain at in terms of premium cocktails?
It is at one of its highest moments. I think that 2017 was the best cocktail year in Spain and the sector is becoming very professional. There is a lot more training available: academies, courses, brands, work… In 2013, I went to sign up for the unemployment benefit during winter. I told them I was a bartender and the person there asked me what that was. Luckily, today being a bartender is more well-known, wages are better… there is still much to improve, but the evolution is noticeable. Now any beach bar has at least five cocktails on its menu.

Are there enough references in Spain?
No. I think there are a lot of good professionals now, but England, Germany, Italy and the rest of the world are far ahead of us on this issue.

Is it difficult to find a good cocktail in Formentera?
Not really. There are some good professionals on the island. Although they do tend to focus more on the classic cocktails. I have opted for tiki cocktails because there was no tiki bar in Formentera. It has been the first one on the island and people are really enjoying it. I think that you can find good cocktails in Formentera, but the prices are high. We have tried to keep them at a reasonable level, within island prices. 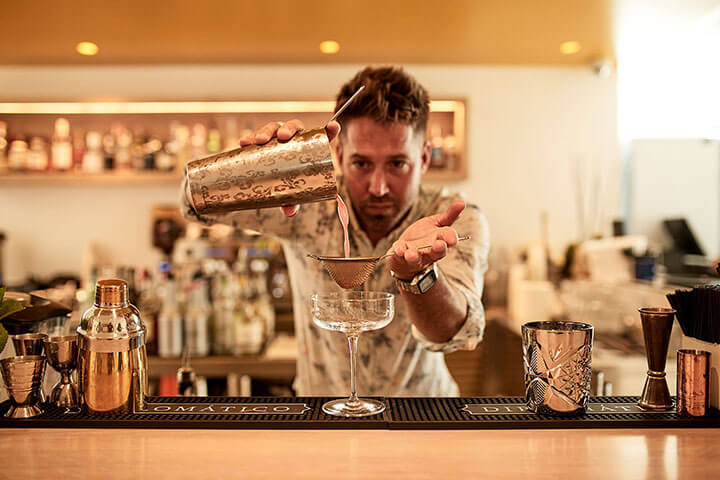 What exactly is a tiki cocktail?
I spent some time in Hawaii and fell in love with the tiki cocktails. They were created in a bar in Hollywood in the 1920s and 1930s from Polynesian and Hawaiian cocktails. Its base is fruit juices and rums with spices. The colours of these cocktails are usually brown and, as they were not very pleasing to the eye, tiki glasses were created, which are like ceramic totems that camouflage the colour of the cocktail. This type of cocktails has become very fashionable in the last five years, you wouldn’t have been able to find one here 40 years ago.

What is the cocktail menu you have created for Cala Saona like?
For Cala Saona I have designed fusions of Mediterranean and tiki cocktails. I like to make cocktails that are very ‘me’, but in this case I have created things that visitors to Formentera will like. I think the offer has a very tropical touch.

Which cocktails do your customers ask for the most?
The Saona Colada is without doubt the star of the menu: it is a kind of piña colada that goes inside an empty pineapple. But, unlike the piña colada, which has five ingredients, this cocktail has 18. It is very colourful and as soon as you see it, you want to ask for it.

What is one ingredient that is never missing in your bar?
Cocktail shakers, rum and pineapple.

What was your first cocktail?
A piña colada. 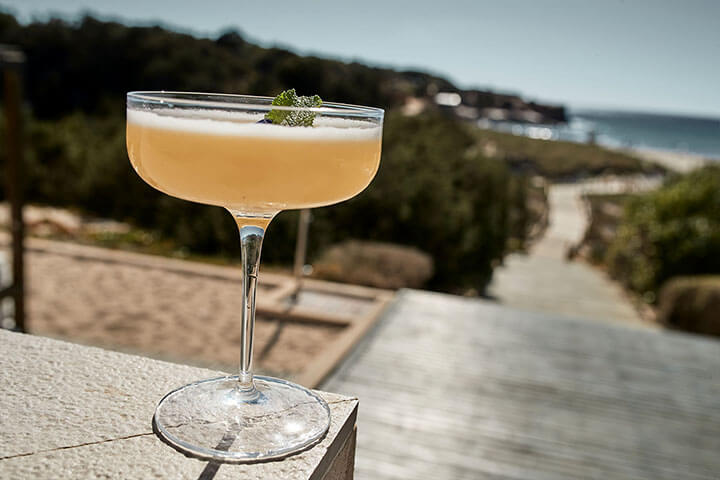