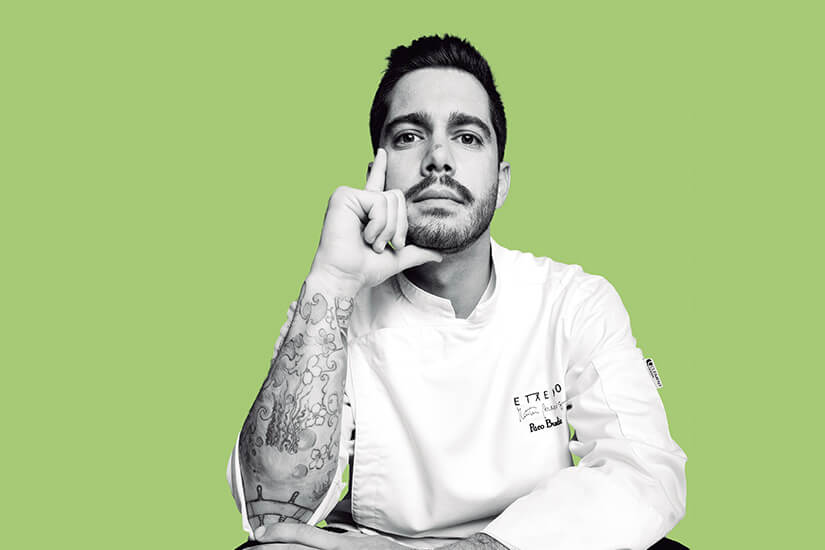 On the eastern coast of Ibiza, perched on a small cliff that overlooks Cala Nova and its magnificent sandy beach flanked by a lush wall of greenery is Hotel Bless Ibiza. Among its many charms, the hotel boasts spectacular views of the cove, incredible rooms, a stunning pool, and a full spa. However, without a doubt one of the hotel’s biggest attractions is Etxeko Ibiza, a restaurant from the internationally-acclaimed San-Sebastian-born chef Martín Berasategui.

Paco Budia is the head chef in whom the award-winning Basque chef has placed all his trust to take charge of the kitchen. Young, dynamic, cheerful, but above all passionate about cooking, the 31-year-old Córdoba-born chef loves his work so much to the point that he admits it is his life. A tireless worker, he started out as a stagiaire at Lasarte at the age of 19 when, after studying at university for two years, he realised that business studies wasn’t for him and that what he actually wanted to be was a chef. What was only going to be a one-year stay turned into four, after which he decided to go and see the world and open his horizons. He had built such a good relationship with Berasategui, however, that when the Basque chef decided to open a restaurant in Ibiza he immediately thought of Budia, since he had had spent years on the island and knew all about its dynamics and produce. 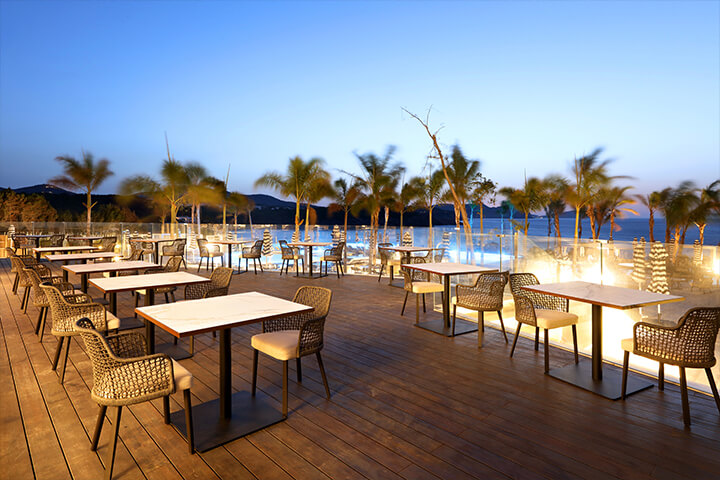 Etxeko has had its fair share of difficulties over the past two years. Delays to the works that forced them to cut short the 2019 season were followed by 2020, a disastrous year for the sector due to the pandemic. Nevertheless, far from becoming disheartened, the Córdoba-born chef is excited for the season that has just got underway.

At FaceFoodMag we had the privilege of sitting down with Budia and experiencing for ourselves the energy and optimism that radiates from the likeable Córdoba-born chef.

Paco, what is it like working for a chef of such calibre as Martín Berasategui? Is it not too much responsibility to deal with?
Well, Martín never stops. Obviously you don’t get to where he is without a lot of effort, rigorousness and self-discipline. He’s very demanding of himself but also of the people who work with him. Working with Martín, however, is very easy, as he’s really friendly and humble.

Martín never stops. Obviously you don’t get to where he is without a lot of effort, rigorousness and self-discipline.

And is he always watching over the restaurants and all of you?
It’s not that he’s watching over us, but that he pays close attention to things. These days, thanks to the latest technology, we’re able to keep in touch constantly and we also have a great relationship with the whole team at Lasarte, which is like our headquarters, especially their four head chefs. What’s more, in winter, when we’re closed in Ibiza, I go to Lasarte and we design the menus together there…

Speaking of the team, Martín always claims that he has a great team and that everything he has achieved is down to this. What’s your opinion of that?
I completely agree with him. The team is key. In my case, I feel like I get a lot of support from the Etxeko Ibiza team, especially Héctor Suárez, who is the head waiter and therefore the face of the business for customers. He’s an extraordinary person without whom it would be impossible to do my job. 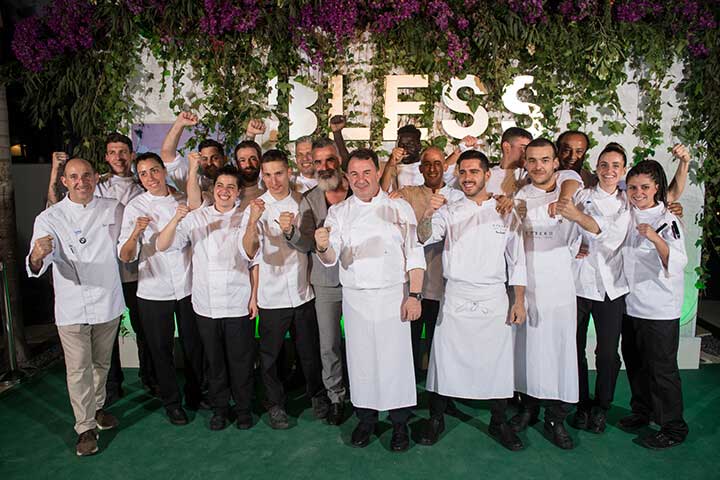 As for the food itself, the philosophy of Etxeko Ibiza is about nostalgia for the flavours and aromas of Berasategui’s childhood in Guipúzcoa. However, as good as Basque cuisine is, it seems to be a little bit at odds with Ibiza’s hot summers…
It’s true that Etxeko Ibiza is based on nostalgia for Berasategui’s own experiences of Basque cuisine, however, when we open a restaurant, we try to adapt the menu to the idiosyncrasies and climate of that place. And of course, to the local produce, which is fundamental for us. Martín believes in helping the local economy by consuming produce made by local producers.

What do you think of Ibiza’s produce?
Its local produce is amazing. The island has one of the best fishes in Spain. There’s also loads of small farmers who grow incredible vegetables and cattle farms that make amazing cheese. In our mind, I reiterate that it’s important to consider these people, these small producers that the local economy is based on…

I reiterate that it’s important to consider these people, these small producers that the local economy is based on…

If you had to pick one dish from your menu, which one would it be?
I’m going to mention two: the first, the famous eel and foie gras mille-feuille with caramelised apple. It’s one of the essential signature dishes of Martín Berasategui that’s always on the menu. Then, there’s another one that I really like, which we all created at Lasarte; it’s a dish of line-caught hake from the Cantabrian Sea, ubiquitous in Basque cuisine, but accompanied by a creamy Thai curry. I love this dish because it’s a fusion of eastern-Asian food and Mediterranean cuisine and because it has that special touch blending tradition and modernity. 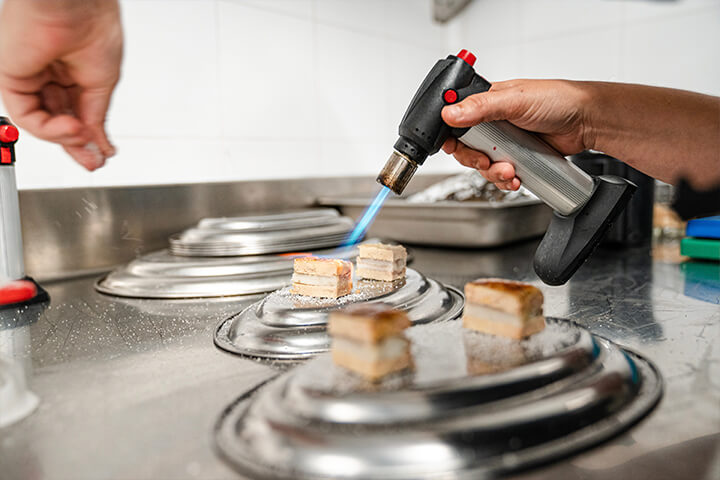 What hopes do you have for this season after the disaster that was the year 2020 for the tourism and hospitality sector?
Well, we’re really excited because, although this is our third season since we opened, we only worked three months the first year, because the works were delayed, and then last year with the pandemic we barely worked a month from the opening to when we had to close. So if things normalise a bit more, this season is going to be our acid test.

What objectives have you set yourselves?
Working with Martín Berasategui is already aiming high. And in this case, there’s no doubt that Martín, and us too, aspire to a star. Although, you’ve got to be realistic and aware of the immense challenge that it represents, because if we manage to finish the season this year, for various reasons, we would only have been open for around 10 months in total since we opened in 2019. Nevertheless, of course we aspire to a star, let’s not fool ourselves, but we’re not obsessed about it and we prefer to think on a day-to-day basis and feel happy and content giving our best and enjoying the work that we love so much. And if awards come in the future, they’ll be more than welcome.

There’s no doubt that Martín, and us too, aspire to a star. Although, you’ve got to be realistic and aware of the immense challenge that it represents