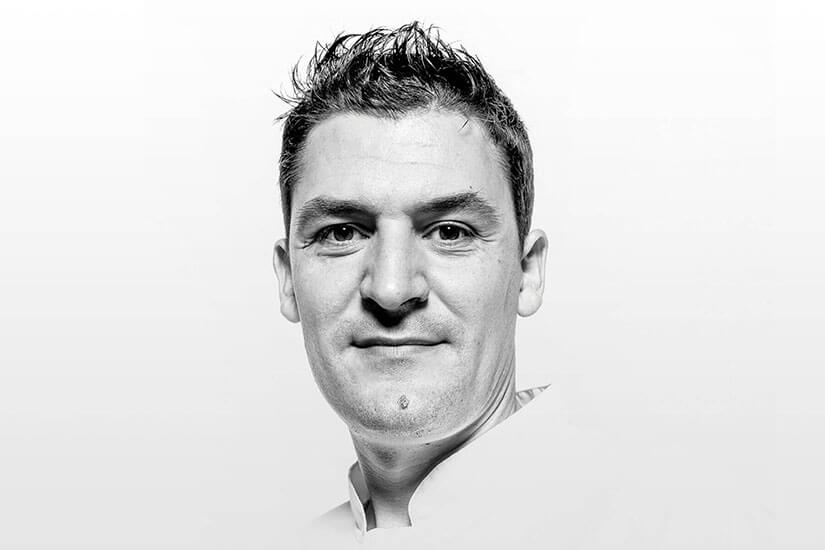 Such is Óscar Molina’s passion for his work that he spends his holidays training. He has spent nearly 6 weeks in Peru in the kitchens of Gaston Acurio, one of the most influential chefs in the world, and Mitsuharu Tsumura, the top Nikkei chef, whose restaurant Maido stands at number eight on the list of the 50 best restaurants in the world. He has also taken part in several conferences and has been working at the forefront of developments in ice-cream, breads and cheeses in order to offer the very best cuisine at La Gaia. He asserts that his aim is to turn La Gaia “step by step” into a go-to culinary establishment. We believe he has achieved that, and also believe that the kitchen at Oscar is the most innovative we have been able to find on the island. No true gourmet can visit the island without experiencing the amazing cooking of this fantastic chef.

You travelled to Peru for your holidays; what were you looking for?
Experiences more than anything, to understand the way of life of another country, the culture, the produce… and especially to experience the country on a culinary level, because to get to know its cooking in its entirety is practically impossible.

Was it your first visit to Peru?
Yes, it was the first.

Tell us a little about what you did.
Gisele, the Operational Director of Astrid y Gastón, from the Gaston Acurio Group, opened the doors to allow me to spend time in the Gaston restaurants. From there I went to La Mar, which is the best known cevichería in Peru, and from there I was fortunate enough to go to Mitsuharu Tsumura’s Maido. I was lucky enough to set foot in the three best restaurants in Peru.

Did you get to meet Gaston Acurio?
No, Gaston is like a Martian; it’s the same with Ferran Adrià: they are entrepreneurs, top chefs, geniuses, and not easily accessible. However, I was lucky enough to be part of the team, and to be given special treatment; I wasn’t there as a mere trainee. I came from an important group, from Spain, from Ibiza, from the La Gaia restaurant. But with Gaston it was impossible: we happened to be in the same place twice during my time there, but always at a distance. It was different with Mitsuharu Tsumura, as I had more contact with him. 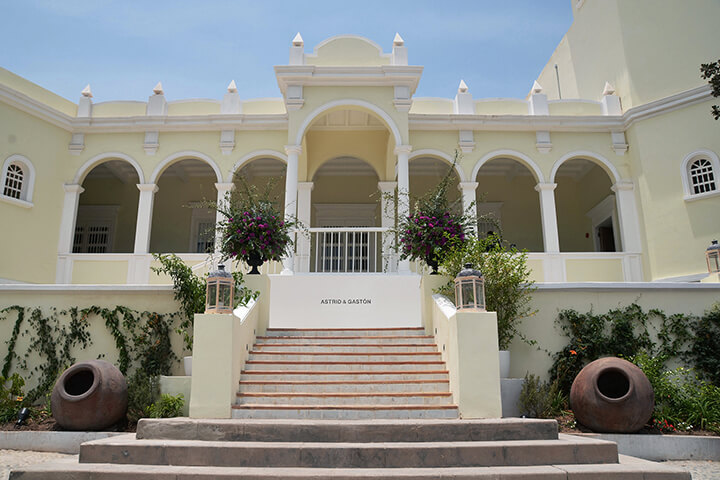 On that point, are there differences between the working day of a kitchen in Spain and Peru?
Lima is a highly chaotic city, and this is reflected in the restaurants, but the complete opposite is the case in Maido and in Gaston’s restaurants. They are run more like a Michelin-starred restaurant that you might find in Spain. In fact it reminded me a great deal of the way El Bulli was run in its day. Such discipline in regard to cleanliness, exceptional care in the handling of the produce… they took it to the limit. The kitchen was cleaned five times a day, properly cleaned: the work stopped and the cleaning started – the walls, ceilings, floors, shelves… five times a day. It was incredible.

Apart from that rather special time, did you experience the street life of Peru?
Yes, of course, I tried everything from the stall where you would pass by, saying ‘I’m not going to eat here’, with blackened walls and a with a guy dressed in a Peruvian-Japanese style, who made an awesome ceviche for 15 Peruvian soles, to la Grimanesa’s place, where I ate the best anticuchos (cow heart kebabs) I’ve ever had in my life. This was a lady who cooked in the street and who, since Gaston discovered her, has opened her own establishment, and it has become a huge success.

And in your experience, where does a chef learn more, in the kitchens of these top restaurants or on the street?
As far as little details are concerned, we are privileged to live in this age. I remember how it was in my father’s time, for he was a chef too, that he hid recipes from his own staff, but nowadays all the information is out there, and there are thousands of accessible channels. So the recipe is no longer so important: it is more important to pay attention to the details, the tricks of the trade, those little things that go unnoticed, except by a professional. And this applies to street cooking as well as to the famous restaurants.

What surprised you most in what you saw?
That what you are told and what you read is not always true. The idea I had of Peru made me think that everything that came from there was good, rather like the case of Japanese cooking, and there is no reason why it should be. Some things are very good, excellent even, but other things make no sense, or perhaps they make sense there, but not here, or not to a tourist.

What, for you, stands out among the good things?
Among the good things, I would choose the flavours, the intensity and the intermingling of cultures. It is clear where everything comes from: whether it is Incan or Creole cooking, or Chinese or Japanese. I would say that Chinese cooking is the greatest influence in the day-to-day cooking of Peruvians. 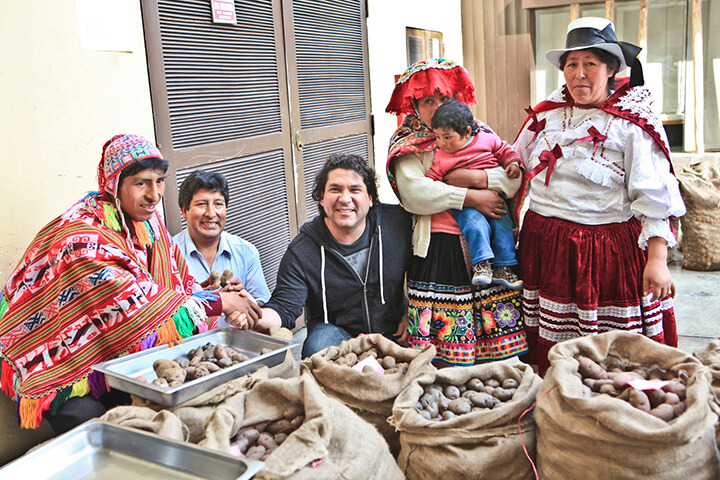 And what about the bad things?
With the excessive use of flavour enhancers, a European palate can be overwhelmed, and that is what happened to me. When I delved further into street food, that was what happened – I experienced an overload of flavours.

And after this experience, will you continue with the Japanese-Peruvian concept at La Gaia?
Yes, of course, this experience has provided added value, and I have come to the conclusion that I do not like all Peruvian food, just as I do not like all Spanish food, but I like what I cook, and I like it very much. This is very clear to me, because I endeavour to combine those three cultures, and to strike a balance between Peruvian and Japanese techniques within a Mediterranean framework with many influences, and this year the Ibizan influence more than any other, and to give it our signature and our stamp, and I believe that combination is amazing.

ApaMeos a hacer, en Barcelona con Tylaseempo perdido.car para aplicar a tu restaurante (fundador de Optima, conocida como la Googlert from Peru, you were at the GastronómiKa food and wine festival, and you were at a conference in Toledo, where you spoke about the place of bread in the catering trade…Does a good chef need to be permanently in training?
Yes, of course. In addition to the two places you mentioned, I went to Balbuena to learn more about ice-cream, and to Tripticum in Barcelona, to learn from Chevi Ramon, who is an expert on the bread we are working with. I also went to Palma for a course with Tomeu Martí, head chef at Arumen. In the end, cooking is all about sharing and giving and interpreting. I believe that this is what places us at the cutting edge, and without all this it would be difficult to progress. Without the opportunity to consult, without stimulation, if your mind is not active and does not experience new things… Just like an architect walks along the street and notices features of the buildings, a chef walks along the street and notices everything to do with food.

I believe that all our dishes are outstanding, as they all have their own distinct identity. It is like asking: ‘Who do you love more, Mummy or Daddy?’

This is your tenth season at the hotel and your fifth at La Gaia restaurant, will this season be special in any way?
La Gaia is undergoing many changes, and will undergo more, evolutionary changes. We were a bar offering ceviches, and then we added sushi, and gradually we are developing into a top-flight gastronomic establishment. We believe that we have some way to go, as we are a long way from where we want to be. Our aim is to one day be a true gastronomic exemplar, in terms of the building as well as the cooking. This year the dining room is undergoing a major conversion. We believe it is a good move, and that people will like it. At the level of the cooking too, there is development: the dishes are much more technically advanced, much more challenging to prepare – for example we are introducing a tasting menu. We are taking these steps towards becoming a go-to gastronomic establishment.

At the end of last season Capel came, and awarded you a 7, which is the highest score he awards to a non-Michelin star restaurant. What does that mean to you?
It means we are on the right track, but we won’t settle for a 7; we know what a 7 means, but we are working to achieve a 7.5. The mere fact that Capel, who is in such great demand, came to try our cooking is a sign that something is happening.

What will be the dish not to be missed at La Gaia this year?
I believe that all our dishes are outstanding, as they all have their own distinct identity. It is like asking: ‘Who do you love more, Mummy or Daddy?’

Which restaurant would you recommend this year in Ibiza?
I very much liked Gennaro Esposito’s It. I think they have a clear aim, and that they are going in an interesting direction.

How do you combine family life with a career as demanding as yours?
Badly, to be honest. You don’t see your family. I arrive home at night and they are asleep, I drop them off at school and then I come here. That is all the time I spend with my children. But I am lucky enough to have a wonderful wife, who I have been with for 17 years, and who understands the world of catering. She knows just how demanding it can be. You have bad times, but they are seasonal; then winter comes and you make up for lost time. 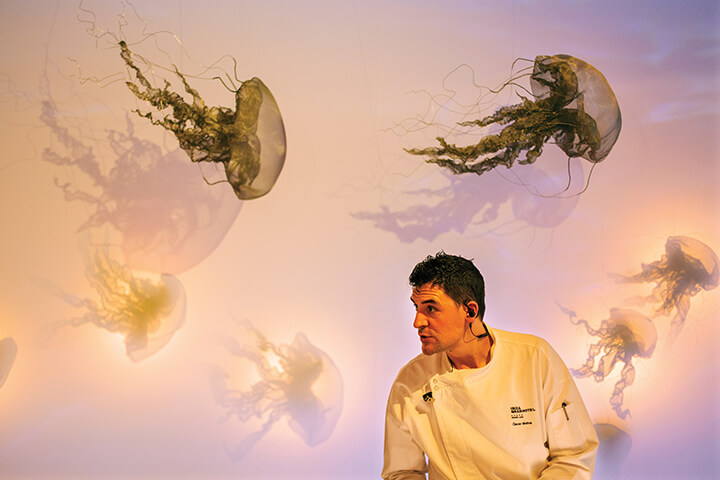