As expected, few new features were introduced to the Michelin Guide Spain and Portugal 2021 at the event held at the Real Casa de Correos in Madrid's Puerta del Sol. The most notable, the recognition for the first time of the most sustainable restaurants, distinguished with a green star.

There has not been any new restaurant awarded with the three stars, although the 11 tri-star restaurants that already had that distinction in our country revalidated their trophies. For its part, since yesterday Spain with three new restaurants with two Michelin stars: Cinc Sentits, Jordi Artal, in Barcelona; the Culler de Pau, Javier Olleros, in Reboredo, and Bo-Tic, Albert Sastregener, in Corçà (Gerona).

Since Monday, December 14th, 21 new restaurants become part of the exclusive club formed by the constellation of Michelin stars, of which 19 are in our Spain and 2 in neighboring Portugal.

In addition, the Guide recognizes 105 new establishments with the distinction of Michelin Dish for its quality cuisine so the number of restaurants reviewed with this recognition already amounts to 880 between Spain and Portugal.

As far as the Big Gourmand is concerned, the face of the Michelin doll with which the guide recognizes the restaurants with the best quality-price relation, there have been 53 new incorporations in both countries so the total of establishments with this distinction already amounts to 300.

Authorities, chefs and presenters at the Michelin 2021 Gala © Guía Michelin

Although not many surprises were expected at the presentation of the Michelin Guide 2021, it is true that this edition has some indisputable winners apart, of course, from the eleven chefs who have revalidated their three stars.

On the one hand, the Culler de Pau, by Javier Olleros, in O Grove, which in addition to having obtained the second Michelin star has been distinguished with a green star.

Jordi Cruz, in addition to revalidating the three Michelin stars in his restaurant Abac in Barcelona, has obtained a fourth one along with Iñaki Aldrey in Atempo, his establishment in San Juliá de Ramis, also in the province of Barcelona.

But without a doubt, the big winner of this edition of the Michelin Guide has been Eneko Atxa, who in addition to revalidating his three stars in Azurmendi, has obtained a new one in Eneko Lisboa and two green stars in Azurmendi and in Eneko, his two restaurants in Larrabetzu. 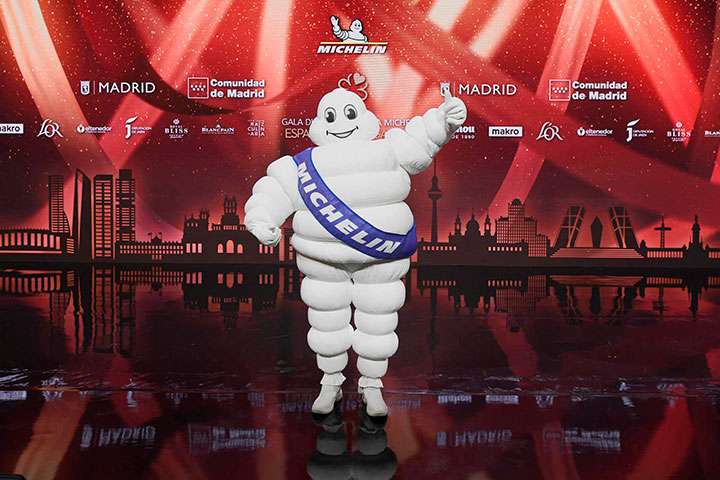 A journey to the stars

No one can deny at this point that 2020 has been one of those years to forget. The health crisis caused by the expansion of the pandemic has been fed to the productive fabric of our societies and the hotel and catering sector has been one of the great harms both in our country and in neighboring Portugal given the high exposure of our economies to tourism.

Those responsible for the Guide, aware of the difficulties the sector is going through and the numerous restrictions imposed by the health situation, have had no choice but to reinvent themselves in order to continue supporting the sector for another year. As a result of this effort, they have presented the Michelin Guide Spain & Portugal 2021 following a script that looks more like a film trilogy (actually, a pentalogy) through five chapters broadcast by streaming under the title of "A Journey to the Stars", and whose final chapter was this events held last night in Madrid.

The previous chapters pay homage to the chefs, review the history of the Michelin group itself, and include a monograph on Madrid, its gastronomy and its chefs. The fourth chapter brings together the 11 chefs who have three Michelin stars in Spain so that they can give us their vision of the sector and what the Michelin Guide itself represents.

The event, co-hosted by actors Cayetana Guillén Cuervo and Miguel Ángel Muñoz, had a cinematographic halo and, although there was a lack of audience, as the restrictions imposed by the health authorities imposed, the presence of the top chefs of Spanish cuisine via videoconference was not lacking.

This way, authorities, cooks, partners and those responsible for the Michelin Guide itself paraded around the screens behind the presenters.

Each of the 11 Spanish chefs who revalidated the three Michelin stars agreed to thank the effort made by the Michelin Guide in a year as difficult as this, highlighting the support this represents for a sector tremendously punished by the health crisis.

The most emotional moment of the evening took place when, after announcing the new Michelin-starred establishments, they connected live with three chefs, Jordi Artal, Javier Olleros, and Albert Sastregener, as representatives of those restaurants that already had a star.In reality, it was all a tactic of the organization to award them live with the second star, something that, of course, left them speechless.

The gala ended with the stellar appearance on stage of DiverXo's Chef, Dabiz Muñoz, who praised the guild's responsible role and who, together with the six cooks who treasure two Michelin stars in Madrid, made a brief review of what has been a tremendously difficult year, although they agreed that they are excited about what next year may bring.

Below we show you all the restaurants with stars from the Michelin Guide Spain and Portugal 2020 and, of course, we congratulate all the chefs and restaurants that have achieved this great distinction.