It’s not Michelin but it shines just as brightly. Estrella Damm, receives Henrique Sá Pessoa in the ambassador armchair.

The chef considers being an ambassador of this new “Estrella” is a new way to value even further the Mediterranean cuisine.

This Estrella fits like a glove the Mediterranean and Iberian lifestyle. It brings along the sun, the beach and the gastronomy: the true mirror of what the chef describes as the “Iberian table”. The wide variety of beer offered by the brand Estrella Damm is also fundamental, from Sá Pessoa’s point of view, as each may be consumed at different moments, for several preferences and with a different style of cuisine. The importance of the creativity and of the personal way of approaching and presenting his recipes may now be combined with Damm’s originality. In addition, the flavour of Estrella Damm’s original recipe is something that may qualify to remain in the taste memory of Portuguese people.

The connection between Estrella Damm and haute cuisine is one of the pillars building up the brand’s identity, therefore, in Portugal, this partnership made even more sense. It’s important to perceive Estrella Damm’s notoriety, as when it came to Portugal in 2012 it faced the years of national economic crisis, and nonetheless continues to present growth levels much above market average. Currently, the brand is already working on the retail channel, focusing on being present at renowned brands, own spaces and specific campaigns.

It’s a space where anything can happen

For all those reasons, one cannot neglect the importance of this connection in Sá Pessoa’s most personal project: the Atelier Henrique Sá Pessoa, a space that works as an R&D lab, providing support to Alma and to the chef’s other projects. Together with Estrella Damm, Henrique Sá Pessoa will be implementing moments in which haute cuisine will be featured, supported by the presence of invited chefs who will have full freedom to create their exclusive menus. This space truly represents a dream come true in the chef’s career. 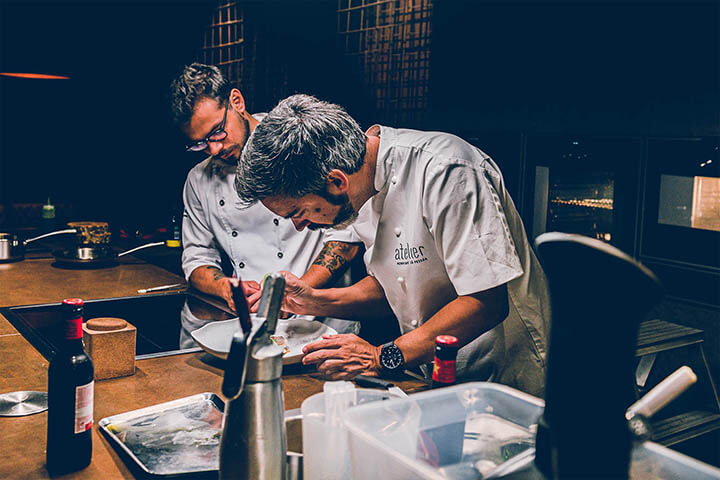 When chef Sá Pessoa opened the Atelier at Marvila, on November 2017, his first goal was to have a space for creation. To experiment, far from the fame and the turmoil of his restaurant Alma, and which could also work as an exclusive “supper club” to receive 12 diners at one single table, in private events or more intimate dinners. Two years later, having received two Michelin stars, the Atelier achieves an even greater reputation. Even because it’s a space where one may enjoy an experience of such closeness with such a renowned chef. However, that concept is not enough for the great entrepreneurial ambitions of Sá Pessoa.

We believe this atelier should be more than a research kitchen for Alma, more than having two or three dinners with chef Henrique Sá Pessoa, but should also be a welcoming space for young chefs to do pop-ups, a kind of creative space where we could create a calendar of events and where anything can happen

The challenge was to maximise the use of the facilities, namely with wine tastings, or even to escape gastronomy and hold fashion events, workshops, events which open doors to innovation, which often remains hidden. “For that space to be alive besides the presence of Henrique Sá Pessoa, for it not to be important only because I’m there” the chef highlights, with the simplicity that defines him so well. The main mission is for people to see the Atelier as a partner. “For me, it’s much more important to leave a legacy to young people who I know are doing a fantastic job but maybe don’t have the exposure, and I can use my image to help them, I find that rewarding and think the sector should be more united”, the chef mentions.

In order to guarantee the financial sustainability of the Atelier, Henrique counted on Estrella Damm which has been bringing into its universe other Michelin chefs, such as Ferran Adrià, of El Bulli, who developed the Inédit beer.