Interview with Esther and Pere, Owners of Sa Brisa Restaurant 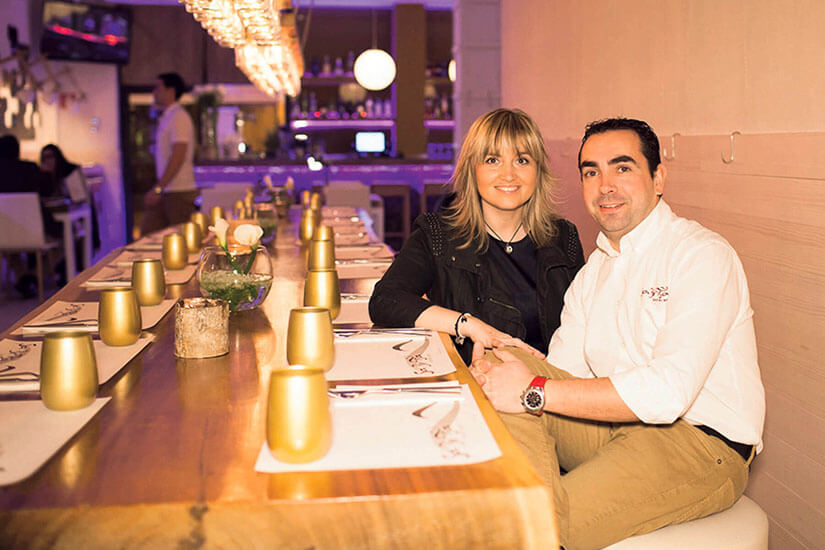 Esther Bonet (Tarragona, 1978) and Pere Vendrell (Lleida, 1977) receive us in Sa Brisa, a ‘gastrobar’ they opened in December 2013 that has earned a place of honour in the gastronomic offer of the island over this short period of time. A well maintained establishment with access from Passeig Vara de Rey and the pedestrian Miquel Soler Gaietà street where you can taste haute cuisine dishes in tapa format that shall surprise the diner. A concept they now want to export to their new catering service.

What is a gastrobar?

E: A gastrobar tries to bring haute cuisine in tapa format to everyone.

What type of cuisine does Sa Brisa offer?

P: It is based on classic recipes—we do not invent anything new—evolved to date with all the techniques of haute cuisine which great chefs like Ferran Adrià have implemented. We offer mainly street dishes, meals you can eat on streets around the world. Our cuisine is a fusion of South American, Mexican, Asian and Mediterranean cuisine.

E: We work mainly on the concept of ‘street food’ evolved into haute cuisine. Something similar to what Heart (the new restaurant of Adrià brothers and Cirque du Soleil) is going to do, bearing obvious differences in mind.

E: As customers ourselves we realized there was a void in the dessert domain. There’s a lot of crème caramel or flan, tiramisu, cheescake, etc., the typical ones. We wanted to go a little further and when we explained our idea to our chef he said he had the right person to carry it out: a French pastry cook who is a member of our team, and the two of them complement each other. We have almost as a wide selection of sweet as salty desserts. It is important to emphasize that we do not add sugar to any of them.

P: A meal without dessert is not a meal. Besides, if you eat well but you get a bad dessert, the last thing you remember is the dessert and you walk away with that bad taste.

Do you use produce of the island?

P: We take from the island all we can use but since our kitchen has many South American and Mexican influences some of the products are not available in Ibiza.

E: We use a lot of local farm eggs, Ibizan potatoes, etc.

P: Yes, it’s about 30%. Our philosophy is never to deceive, we don’t use only Ibizan products, because it is not feasible for the cuisine we practice.

After only eighteen months Sa Brisa has already been mentioned in the Michelin Guide. Do you think it deserves a star?

E: We are still a fresh business. Besides, it’s not for us to decide.

P: One thing we do know is that we work very hard to give it all, we demand quite high quality and we keep raising the level of our expectations every day.

E: We’re not seeking recognition, if we come to attain it, it shall be as the result of all our effort. It is not our purpose to obtain a star.

Who do you believe deserves one?

E: There are many people who have been working hard and well for many years. There are many young chefs who excel such as José Miguel from Es Ventall or Iñigo from Pacha Hotel.

P: Can Berri Bei is being frequently mentioned, Amalur almost got it a few years ago…

How do you perceive the present Ibiza’s gastronomy?

E: We realized a year and a half ago that many people are keen to show that Ibiza is more than a tourist destination, we do not only have restaurants to make money, there are people who care about doing something more. We believe, however, that it is very recent.

Where did the idea of coming to Ibiza and setting up this business come from?

E: We have been coming to the island for 15 years. Three years ago when we made our dream of buying a house here come true, we saw an opportunity of opening a restaurant with a concept that did not exist and were lucky to find the staff to materialize it.

How do you choose your team?

P: By seeking experience. We knew that in order to carry out the project we had in mind we needed haute cuisine personnel and the first thing we considered while doing the research was that we should invest heavily in staff. So by selecting employees with a good curriculum and paying them well, you get to have a good team.

E: We do not have kitchen assistants, they are all cooks and chefs.

P: Each one of the six who are in the kitchen have worked in a Michelin-starred restaurant.

Speaking of Michelin-starred restaurants, does the emergence of great chefs like Adrià, Roncero or Arola benefit the island?

E: It is a very good thing, it’s just perfect. It benefits all of us who offer this kind of quality.

P: They attract the type of gastronomic clientele that is of our interest. This class of cooks will attract the food tourism that is being so promoted nowadays. Tourists are supposed to come while these chefs are here.

What is your evaluation of the year and a half since the opening?

E: Very good, very positive to us because it has had a good reception.

P: Very good. We are proposing to export this concept abroad due to the acceptance it has had here, not only by the locals but also by the tourists. Many tourists who come to dine request us to open another one in London or Milan. There are customers who spend a week on vacation here, come to us three or four days in a row and keep asking for it. This makes us feel very proud.

P: The problem of seasonal produce places is that everyone wants to bill, over a period of four or five months, enough to be able to live off it the rest of the year, and this sometimes forces you to somewhat diminish quality. Obviously, if you do things very well—as we strive to do—you do not count with the same margins nor the same benefits as you would if you didn’t do things that well or did them poorly.

And how does it affect you?

E: It doesn’t affect us much. It does affect the volume of the clientele, but since we are clear about what we want to do, we never diminish the quality. We work with fresh, only top-drawer products and receive daily supplies throughout the year. It affects us in winter because the influx of customers who could value our concept decreases.

Is composing the menu an exclusive responsibility of the cooking team or do you also get involved?

E: We knew when we chose the team that what we wanted was a staff willing to contribute, not people to be told what they have to do. We discussed the recipes, we tried them all together and decided which of them to include in the menu, but they were the ones making suggestions.

P: There’s nothing better than recognizing your own limits and using them to find people who can contribute beyond them. We wanted to hire good professionals who would bring good things with them, and give them wings so they could create.

One last question, this time unrelated to the professional setting: How do you like your life on Ibiza?

E: We love it, it’s fantastic. We love living in Ibiza. We liked it before and we like it more now because even though we work a lot, we have a quality of life that we did not have in Lleida. It is due to the good weather. Picking up our daughter from school and going to the beach to play every day makes you feel like being on vacation. And this happens to us very often. Any day that we go to the beach or go out to lunch on Mondays, the feeling of getting away… we did not have that in Lleida. 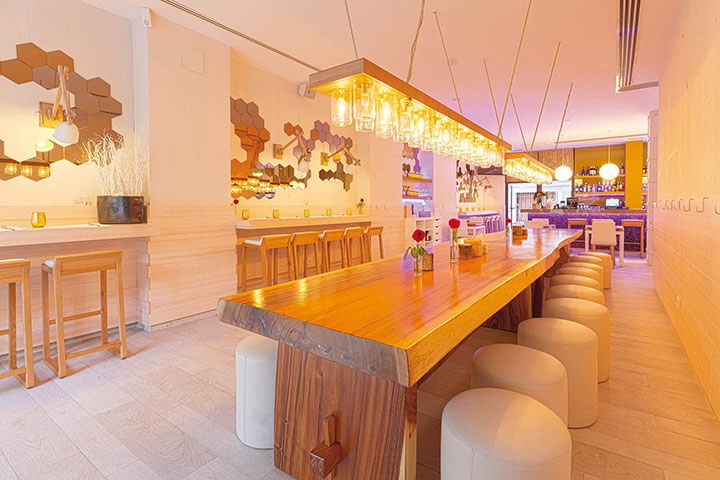