The culinary journey of Ibiza’s most iconic cherries 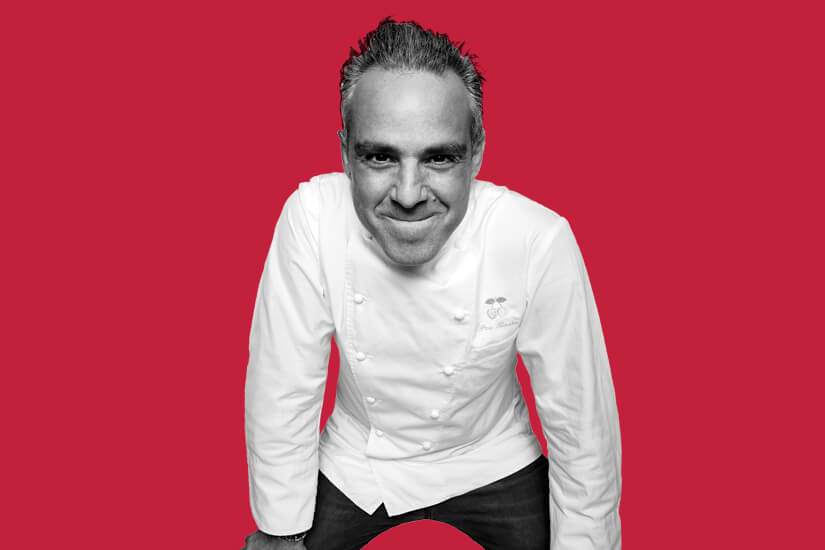 With Pau Barba as executive chef, Grupo Pacha has taken a qualitative leap forwards with its food and now offers diverse culinary experiences with one common denominator: the quality of the final product and service that pays great attention to detail. More than ever before, the food is one of Grupo Pacha’s main attractions and this year it will open its first establishment in Formentera – and its first beach chiringuito.

Having become a symbol of Ibiza, this season Grupo Pacha is making the leap to the smallest of the Pityusic Islands by opening Casa Pacha: a charming hotel that will also be home to the group’s first beach chiringuito. Where the sand and sea merge, simplicity makes itself at home in large rooms just steps from Migjorn Beach, next to the shimmering dunes and in total harmony with the environment. Textures, artisan crafts, decoration with nods to rural tradition and the Pacha legacy are visible in every corner of the establishment.  The pandemic cut short the opportunity of opening last year, but in 2021 the Grupo Pacha team, specifically the Casa Pacha Formentera team, has made every effort with its big debut. Like the other establishments in the group, food plays a key role at Casa Pacha. Its beach chiringuito, run by Pau Barba (winner of the Best Chef in Ibiza 2020 award) is an idyllic space opposite the Mediterranean, ideal for enjoying a relaxed meal with your feet practically on the sand.

The Casa Pacha chiringuito is an idyllic space opposite the Mediterranean where you can enjoy a relaxed meal with your feet on the sand. 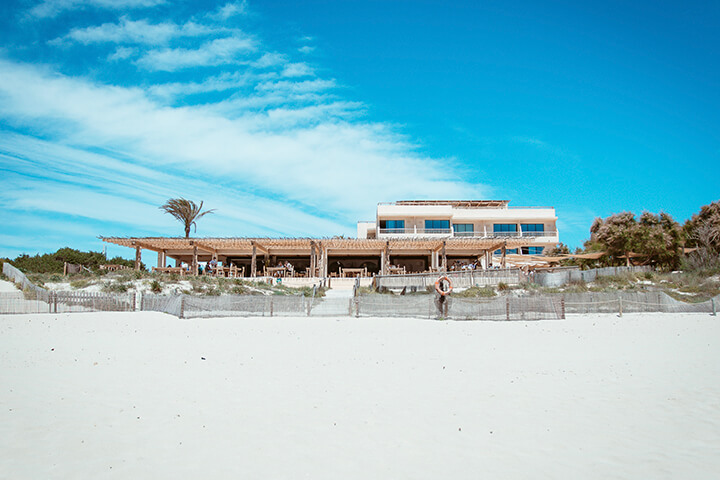 Pau Barba arrived in Ibiza in 2009 and quickly took off as executive chef at the Lío Ibiza kitchen after having worked at prestigious restaurants, alongside the Torres brothers (2 Michelin stars), and at Abac (3 Michelin stars), and Les Cols (2 Michelin stars), among others.  He has a natural passion for food and recounts that, when he was given money by his parents for his 16th birthday, he went to have dinner alone at Neichel (1 Michelin star). He put all the money he had on the table and asked them to let him try everything possible from the menu. Jean Louis Neichel couldn’t resist coming out to talk to this boy who already showed such promise.

In 2014 he moved on from preparing 500 daily covers at Lío Ibiza to run small agrotourism restaurant Can Domo. That was where he developed his own culinary language, becoming indispensable to Ibiza’s food scene. This year, Pau Barba is setting off on a new journey within Grupo Pacha, heading up the new Casa Pacha Formentera project.

In the spacious open kitchen where Pau Barba and Julián González work, they create select bites from local, high quality raw materials, particularly highlighting the fish and seafood. Time seems to stop at Casa Pacha and your heart rate slows; the only thing that could give diners palpitations is the dishes on the menu – but it would only be from pleasure.

Incredible smoked salmon with tartar sauce, sea bass tiraditos with basil and pineapple, sea cucumber in garlic sauce with artichokes and egg... The Casa Pacha chiringuito menu is a series of non-stop sensations! Formentera langoustines: grilled or with fried egg and chips? Or how about a tasty brothy rice with blue lobster? There are also options for meat-lovers, such as half loin of purebred beef. And to finish – although no one will want this gastronomic extravaganza to end – a warm chocolate coulant or crema catalana.

Destino Pacha Ibiza: the true flavour of the island

The kitchen at D-Lounge (the Destino Pacha Ibiza restaurant), headed up by Ibiza-born Daniel Barrabés since 2018, has honed its identity each year thanks to the excellence of the chef and a team that he orchestrates to perfection. It consists of José Vicente Mascaros (chef), Davide Roana and Edgar Berrocal (sous chefs), Isard Pérez, Mariana Rey (patisserie chefs), Malcolm Velasques (head sushi chef) and the station chefs, cooks and other members of a totally sensational team. 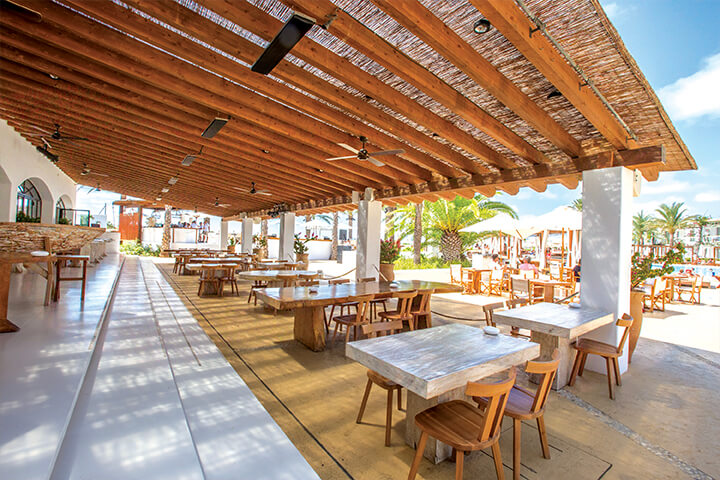 Since 2020, Mediterranean food has been the main feature at D-Lounge, with an international touch in the aperitifs and the sushi range, offering the greatest variety possible through different bites. Lobster salad, a delicious truffled omelette that melts in your mouth, freshly-made sushi and spectacular wagyu beef are just some of the many options available at D-Lounge that will win over the most discerning diners.

Chef Barrabés likes to change the flavour of the product as little as possible. Naturalness is one of the strong points of his cooking and this is closely linked to what Destino means to him: “it’s the pure essence of Ibiza thanks to its white, open, rustic spaces at the gates to the Mediterranean Sea. As an Ibiza local, Destino represents the ultimate image of Ibiza because we can even see Dalt Vila from the kitchen, which is a real luxury. I wouldn’t understand my profession right now without Destino,” he declares.

The Lío Ibiza menu constantly changes, experimenting and evolving each year, and won’t fail to make an impression in 2021. Under the theme “Heaven & Hell”, it includes a series of “earthly pleasures” that chef Adrián Marín assures us will be rich in flavours and delicious from start to finish. Sous chefs Pelayo Menéndez, Luis Rodríguez and Alicia Pelayo and patisserie chef Marcos Curiel, all stand out at the Lío Ibiza kitchen. 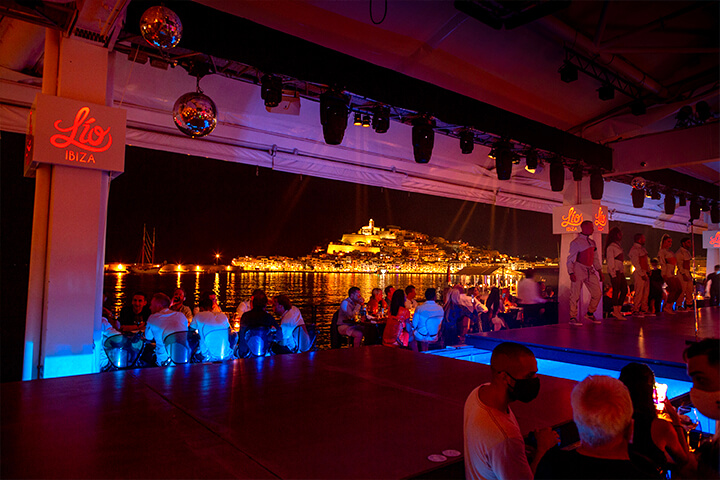 Turning to the menu, noteworthy starters include tomato tartare – repeated on the menu this year after having been such a hit – steak tartare, ceviche and tuna cornets. And for the mains, chef Marín has created dishes for meat and fish lovers alike. There are four different meat options: piglet, denomination of origin suckling lamb, Chilean wagyu and poussin, while fish dishes include octopus, whole squid, wild sea bass, and rice with scallops and prawns. And of course, the desserts are sensational too thanks to their ingredients and original presentation. “The presentation of dishes at Lío has always been spectacular but it’s not just about beauty, the key is in taking great care with our dishes and using the best produce. Whenever it’s possible, we try to use zero-mile produce. In fact, when we can, this year at Lío we’ll have squid and lobster from Ibiza,” Adrián Marín explains.

Adrián Marín: “The presentation of dishes at Lío has always been spectacular but the key lies in taking great care with our dishes and using the best produce”