Chef José Avillez, a journey through Portugal looking for discoveries

The restaurant Belcanto, by José Avillez, is considered to be one of the 50 best in the world. With two Michelin stars, the chef presents a new location for Belcanto: brighter, with more seated places, a bigger kitchen and also a greater proximity between the dining room and the kitchen, which enriches the sensorial and gastronomic experience of those who visit it. Ready to make his already earned stars shine even brighter.

At Belcanto the sensorial pleasure becomes the object of special attention. Behind the success is one of the most renowned Portuguese chefs – José Avillez.

He studied arts, wanted to be an architect, graduated in business communication, but when he first entered a professional kitchen, he knew he wanted to be a cook for the rest of his life. His big dream was to open a restaurant with 20 seats close to home, in Cascais, but today, 19 years later, he has 20 restaurants, seventeen in Lisbon, two in Oporto and one in Dubai – a team with more than 500 people working and two Michelin stars conquered in Belcanto.

It’s in Belcanto that he presents his Contemporary Portuguese cuisine, prepared with the best products combined with art, with the boldest techniques and an unwavering devotion.

One must experience Belcanto to truly know its cuisine

Besides the offer of emblematic dishes à la carte, there are also two Tasting Menus: the Evolution Menu, called that way because its moments are an interpretation of Belcanto´s classical dishes (and of the Portuguese Gastronomy) reinvented through technique; and the Classical Menu, that includes the oldest dishes of the list, indispensable when defining the nature of Belcanto. Despite the experiences of the different menus and list, there are common features: a journey through Portugal, the look at discoveries, the Portuguese experiences and the passion for cooking.

Certain that he wouldn’t achieve anything on his own, José Avillez highlights the importance of understanding that “good cuisine” is the work of a very dedicated team. 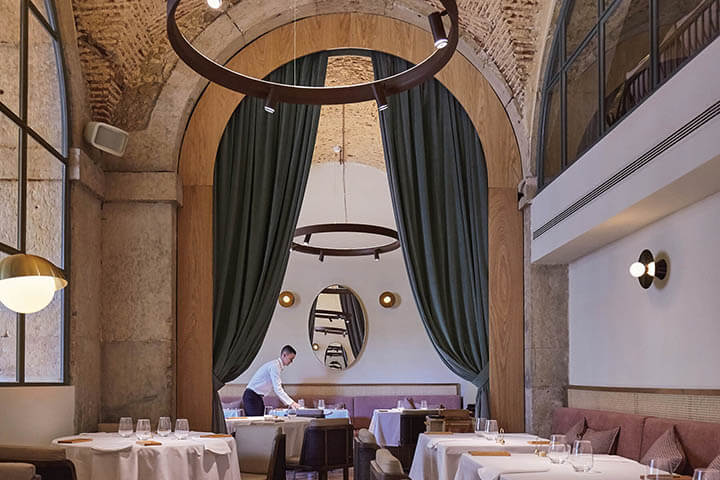 New Belcanto is calling the shots

The mission of the Avillez group is to keep working with dedication and searching for innovation, something which is already being done at the new Belcanto.

It’s an aesthetically different space, higher, but with the same nature: “we brought our history”, says Avillez, underlining that the change is for the better. There’s more kitchen space, with a bigger chef’s table, three separate rooms, being one of them private, where one can have more exclusive dinners.

In the new Belcanto, we have all the conditions to evolve. we have a team that works with such energy and momentum that it’s a pleasure to live like this

The right arm of Avillez

“It would have been impossible for me to have followed this path without David”, that’s how José Avillez starts to describe his professional relationship with David Jesus.

They met at Pestana in 2003 during José’s internship: “there was an immediate chemistry, some years later we found out we celebrated our birthday on the same day; then, from 2003 to 2007, we had occasional projects that ended up not being developed, and when the possibility came up to work together we went on the adventure… it has been 12 years now”, José Avillez mentions. What united them was the passion for cooking, and in addition the respect and admiration were the true icing on the cake.

Regarding the challenges felt in the restaurant sector, David Jesus uses them as an incentive: “the machine doesn’t stop, we permanently want to grow and we know there isn’t much time left to think about other things, but I think that creates a very positive movement and energy for the whole team”.

José Avillez considers that in many aspects he’s like a director. He’s the one that selects the best among the best to carry out his vision – a gastronomic film, “which is much better than me and much better than those people, because we can only reach success together”, he guarantees. The duo makes sure that they grow together and complement each other every day.

Bringing the world´s flavours to Lisbon was another vision that Avillez fulfilled: in March 2019, in Chiado, he opened “Casa dos Prazeres”, a bar and an Asian restaurant, signed by Estanis Carenzo, with a seductive environment and an authentic cuisine, and O Rei da China, where he presents fast and authentic meals inspired in Asian street food. In December 2017, at the Gourmet Experience of El Corte Inglés Lisboa, opens Barra Cascabel in partnership with Mexican chef Roberto Ruiz, where he proposes authentic Mexican flavours and original and irresistible cocktails in an energetic and irreverent atmosphere; in June 2017 he opens Cantina Peruana, in partnership with Peruvian chef Diego Muñoz, that offers contemporary Peruvian cuisine in the informal and bohemian atmosphere of the typical “cantinas” from Lima, and the best Pisco Bar in Lisbon.