Carnes Diego, reinventing the concept of the ‘butcher’s shop’ 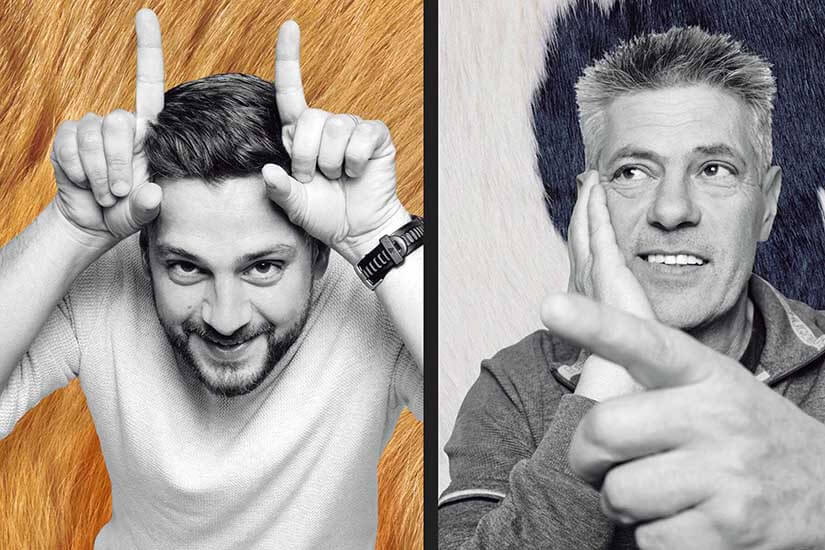 They say that they can’t be separated. Diego and Iván are father and son and run Carnes Diego. They admit that “they sometimes clash as they are both perfectionists and are always striving for the best for the company.” But, despite the generational differences, they enjoy the harmony of working together. And on Sundays, they talk on the phone or have lunch together, just like any other family.

Diego Chacón arrived in Ibiza in 1974. After working in a butcher’s shop for 27 years, the idea of creating his own company began to take hold. Although he emphasises that the idea was his wife’s, not his. “She encouraged me to set up the butcher’s shop. She looked for the premises and almost forced me to start the business,” he says with a smile. “My wife and I both opened the shop in 1998. The first five years were tough, and we worked very hard. We still work 18 hours a day today,” he acknowledges. 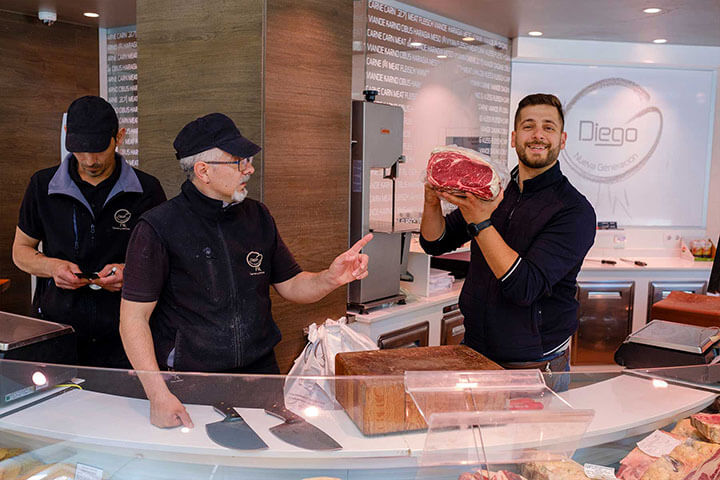 The small butcher’s shop in Mercat Nou de Ibiza, soon began to need more space. They started supplying several hotels and restaurants and, although “growth was very slow and controlled,” the company evolved. Iván, Diego’s son, joined the team and they acquired a second store, with the aim of completely innovating the concept of a butcher’s shop. “The idea was to highlight the importance and origins of each cut of meat, giving value to the quality, not the quantity, of the products on display. A typical butcher’s shop stands out when it has many products on display, but we did not want that. We enjoy taking great care of each product we display and are mindful of how we display it. Our store is like our toy: we assemble the service we provide restaurants according to how the customer has requested it, but at work there is more flexibility and we can do things differently; those possibilities are a lot of fun,” explains Iván.

We have completely innovated the concept of a butcher’s shop. The idea was to highlight the importance and origins of each cut of meat, giving value to quality

The customer perceives the differences that Diego and Iván refer to as soon as they enter the store. Both state that when they opened the butcher’s shop, people would note that it looked like a jewellery store. “Our designer initially refused to carry out our project,” they say. “She told us it was very risky because, according to her, the glass and white counters would highlight the blood and dirt too much. But that is exactly why we wanted it done that way, we want to be totally transparent with our customers: the fact that they can see how we work forces us to pay extra attention to hygiene and do things in the best possible way. The butcher’s shop is white because it is always impeccable.” Innovation is an essential part of their day-to-day life, which is why the father and son team invest a lot of time and money in travelling and trying new things. And being true perfectionists, they do not yet believe that their store is exactly where they would like it to be. “We have many ideas that we will carry out with time,” explains Iván. 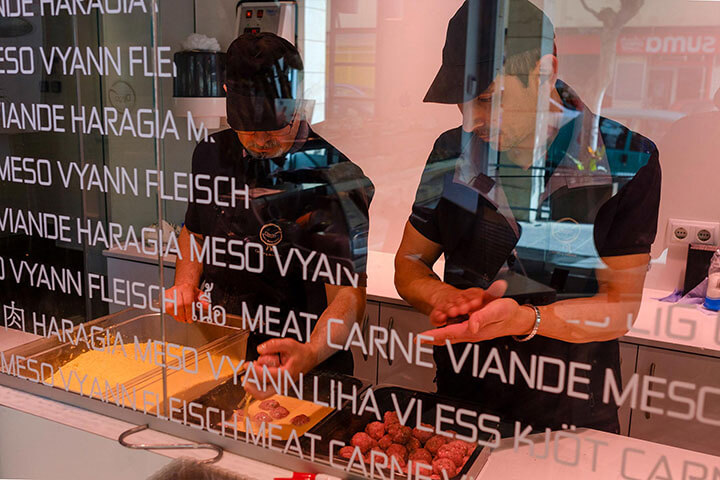 Carnes Diego works with all kinds of products, “from the most basic all the way up,” although Diego and Iván acknowledge that they are known mainly for their gourmet meats. One of their star products is the hamburger. Every day the team produces approximately 42 types of hamburger and, except for the two classics, all their products are free of additives, preservatives, and suitable for those affected by coeliac disease and gluten intolerant people. “The secret to our hamburgers is that they are made with quality meats, we use quality mince and, most importantly, the preparation is done entirely by hand. We have decided to take a step back to ensure quality and, although we have the machinery needed to make hamburgers, we still prefer to prepare them by hand, regardless of the extra time that takes.” Another one of their well-known products is cured ham. “We have very good suppliers who have helped us grow. Gourmet Ibérica, for example, supplies a ham that never disappoints, which allows us to be sure that the customer will always be satisfied. And that is why our ham sales have increased so much,” says Diego.

We want to be totally transparent with our customers: the fact that they can see how we work forces us to pay extra attention

But if there is something that Carnes Diego customers really appreciate, it is the friendliness and direct contact that both Diego and Iván offer. If a client has any problem or request, they can simply talk to one of them, and when resolving an incident, speed is their best weapon. “Our strength is the service we provide. We move heaven and earth to ensure our customer receives exactly the product they asked for,” they say. “Because of the type of product we offer, we work with distinguished restaurants and hotels (Pacha Group, Blue Marlin, Atzaró, Palladium and Nassau, among others). Everything we sell is served as the client has requested it: the cuts, the packaging, etc. The customer’s product is completely personalised to their requirements”. 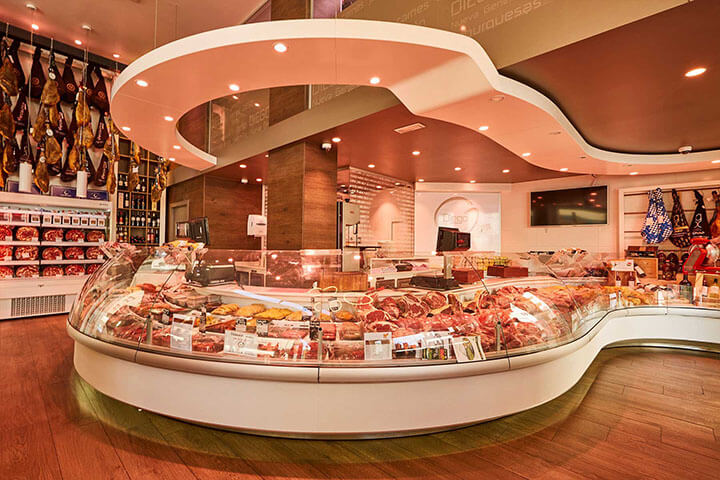